With the historic Paris Agreement having recently entered into force, this year’s Climate Change Performance Index (CCPI) 2017 confirms a boost for renewable energy and positive developments in energy efficiency. While these encouraging trends are happening on a global scale, the necessary energy revolution is still happening too slowly. Jan Burck, Germanwatch, key author of the CCPI comments: "The conditions for a global energy revolution have never been better. Due to the falling costs of renewable energy and efficiency technologies, national governments have no more excuses not to enshrine the Paris Agreement into national law." 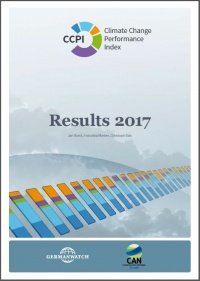 A comparison of the 58 top CO2 emitting nations

Under the Paris Agreement, climate action was anchored in the context of international law. This requires countries to make their own unique contribution to the prevention of dangerous climate change. The next crucial step to follow this agreement is the rapid implementation by the signing parties of concrete measures to make their individual contributions to the global goal. For the past 12 years, the Climate Change Performance Index (CCPI) has been keeping track of countries’ efforts in combating climate change. The varying initial positions, interests and strategies of the numerous countries make it difficult to distinguish their strengths and weaknesses and the CCPI has been an important tool in contributing to a clearer understanding of national and international climate policy.

Africa is the continent that was hit hardest by extreme weather events in 2015. According to the 12th edition of the Global Climate Risk Index, four out of the ten most impacted countries globally are African: Mozambique (Rank 1), Malawi (Rank 3), Ghana and Madagascar (both Rank 8). "Especially flooding affected the hosting continent of this year's climate summit", says Germanwatch's Sönke Kreft, main author of the Index. Heat waves claimed most lives last year. More than 4,300 deaths in India and more than 3,300 deaths in France show that both developing and developed countries are impacted by extraordinary temperatures. Kreft: "Increases in heavy precipitation, flooding and heatwaves are to be expected in a warming world."

Blogpost
07 November 2016
Climate change, civil society engagement and the importance of COP 22 for the Arab region

Boris Schinke, Senior Advisor Energy and Development, interviewed Safa Al Jayoussi, head of the Climate and Energy campaign of the NGO "Indyact" based in Lebaon and Jordan. She is also the co-coordinator of the Climate Action Network Arab World.