The 5th civil chamber of the Higher District Court Hamm (Germany) wrote legal history today. It gave a clear statement that large emitters like RWE are liable for supporting people in poorer countries affected by climate change. The climate-suit of Saul Luciano Lliuya will therefore enter into the next phase. On 30th November, the court is expected to formally announce its decision to enter into the evidentiary phase. At that point, it will be necessary to provide sufficient evidence in this specific case to prove that RWE must provide a financial contribution as Luciano Lliuya has demanded. The court's argument is of great significance for many people who suffer from climate change impacts.

Increased intensity of storms takes a toll on small island states and poor countries / Since 1997, over 520,000 people have been killed by more than 11,000 extreme weather events

Small island states are amongst the countries most impacted by extreme weather events worldwide. A number of developing countries regularly already have to address weather catastrophes, especially poorer countries like Haiti, Sri Lanka or Viet Nam are facing great challenges. These are some of the key findings of the Climate Risk Index published by Germanwatch today at the climate summit in Bonn.

On November 13th (Monday) the fifth Civil Senate of the Oberlandesgericht (Higher District Court) of Hamm (Germany) will conduct an oral hearing in the appeal of the Peruvian farmer and mountain guide Saúl Luciano Lliuya. In this climate justice lawsuit, the core question is whether the energy corporation RWE may be held partially responsible for protective measures against climate change in the high Andes in Peru. There, the city of Huaraz is threatened by a flood wave from a glacial lake that has increased in volume as a result of climate change. The Landgericht (District Court) Essen rejected the civil law suit that is – so far - unique in Europe. The question is now whether the higher court will enter into the evidentiary phase which would establish a ground-breaking precedence.

Italy, Brazil and France rank, albeit with some concessions, as best in class ahead of Germany – while the US and Saudi Arabia can be found at the lower end. So far no country in the G20 is on track to meet the Paris climate goals.

The G20 collectively are still far removed from demonstrating responsible stewardship in the area of climate protection. Yet individual countries – both traditional industrial nations such as Italy, France and to some extent Germany as well, and emerging economies like Brazil and India – have indicated possible pathways to decarbonization. This is the key insight provided by the G20 Climate Change Performance Index (CCPI), introduced by Germanwatch, the Climate Action Network (CAN) and the NewClimate Institute today. A day ahead of the G20 summit in Hamburg, the member states have highly diverse scores within the ranking. 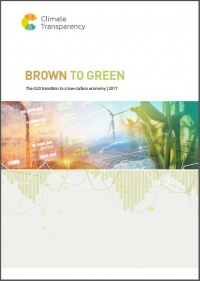 G20 countries have stepped up green finance, but their investment in fossil fuels remains so high that the “well below 2 degree” warming limits set in the Paris Agreement will be missed by a wide margin, says this year’s “Brown to Green” Report from Climate Transparency. The "Brown to Green-Report: The G20 transition to a low-carbon economy 2017" is the third annual stocktake of the G20’s climate efforts by the Climate Transparency global partnership, released today ahead of this year’s meeting of G20 leaders in Hamburg. It has been developed by a group of experts from the G20 countries Argentina, Brazil, China, France, Germany, India, Indonesia, Mexico, South Africa and the UK. 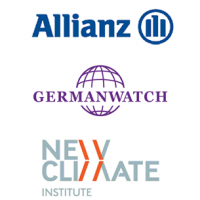 Most G20 states improved conditions for investments in low-carbon energy over the past year, with several emerging market countries rapidly catching up to the leaders. The rapid development of the renewable energy sector is a crucial success factor for meeting the Paris climate goals. The G20 countries need to roughly double their annual investments in renewable energy to align their power infra-structure with the well below 2°C pathway, fixed at the Paris COP 21 in 2015.

Parallel to the political negotiations at the UN Climate Summit in Bonn, the legalities of climate change and its consequences will be on the agenda in Hamm. The Peruvian mountain guide Saúl Luciano Lliuya is taking his suit against RWE to the court of second instance.

The 5th Civil Chamber of the Higher District Court Hamm (Germany) has scheduled an oral hearing for the appeal of Peruvian mountain guide and small farmer Saúl Luciano Lliuya for 13 November (Monday). The public hearing is set to take approximately two hours. The scheduled date lies in the middle of the two-week UN Climate Change Conference in Bonn (Germany, 6 – 17 Nov.), which will likely attract added international attention to the case. The attorney for the claimant, Dr. Roda Verheyen (Hamburg), is pleased by the Higher District Court’s decision. “I am confident that this initial hearing will now be followed by an evidentiary phase."

To reach the Paris Agreement climate goal, and stay under 2°C warming, emissions will need to peak in the coming years and be reduced to zero by 2050. China, India and the US play a key role in achieving this target as they emit over 50% of the global CO2 emissions and are by far the largest markets for renewable energies. Published today, the Allianz Climate & Energy Monitor Deep Dive aims to inform investors and policy-makers on the scale of investments needed in China, India and the US to be in line with the Paris goals; and what recent developments, especially regarding the leadership change in the US, mean for investing in renewable power in the future.

Saúl Luciano Lliuya will file an appeal to the Higher Regional Court Hamm (Germany) against the decision made by the District Court Essen. The Peruvian, who lives in the high Andes, aims to make the german energy corporation RWE bear a share of the costs for protective measures against the impacts of climate change on his home.

Today the mountain guide and small-scale farmer Saúl Luciano Lliuya from Peru filed an appeal against the decision made by the Regional Court Essen (Germany) in his lawsuit against RWE. Together with his attorney Dr. Roda Verheyen (Hamburg), he will continue his efforts before the Higher Regional Court Hamm to compel RWE, as the largest emitter of CO2 in Europe, to contribute to protective measures against the effects of climate change in the Peruvian Andes. These effects threaten major parts of his hometown, Huaraz. The court of first instance had dismissed the “climate suit” in mid-December.

Today, the Regional Court Essen dismissed the civil suit of Peruvian mountain guide Saúl Luciano Lliuya against RWE. The legal process is likely to continue: Attorney Verheyen announced that her client will “most likely” present an appeal at the Higher Regional Court Hamm.