The G20 countries are responsible for around 80 % of global greenhouse gas emissions, and 85 % of global GDP. In the G20 countries, around 70 % of climate impacts could be avoided by limiting global warming to 1.5°C instead of 3°C. The G20 have a political responsibility as well as economic interest and capability to move the world towards a 1.5°C compatible pathway. The Brown to Green Report 2019 takes stock of the G20 countries’ climate action.

Main findings of the Brown to Green Report 2019

G20 energy-related CO2 emissions increased by 1.8 % in 2018 because of high economic growth and growing energy demand. In several countries, energy supply from coal, oil and gas has kept increasing in 2018. 82 % of the G20’s energy mix is still fossil fuels. This must fall to at least 67 % by 2030 and to 33 % by 2050 globally to be 1.5°C compatible, and ultimately to much lower levels. Progress in the energy efficiency of G20 economies has also slowed in 2018. 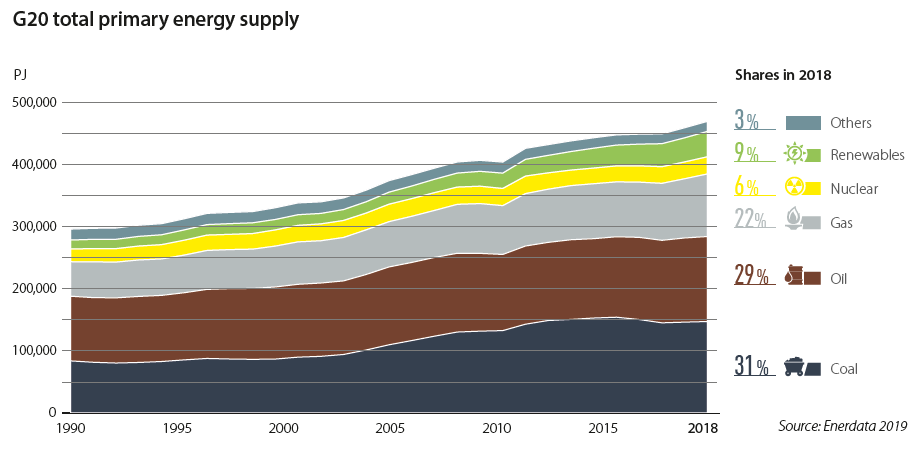 Currently, none of the G20 countries’ NDCs is in line with a 1.5°C limit. In 2030, emissions would be more than twice as high as what is needed for 1.5°C. Seeing that about half of the G20 countries are projected to meet or surpass their national climate targets (NDCs), this indicates plenty of room for increasing ambition in the 2020 NDC update. 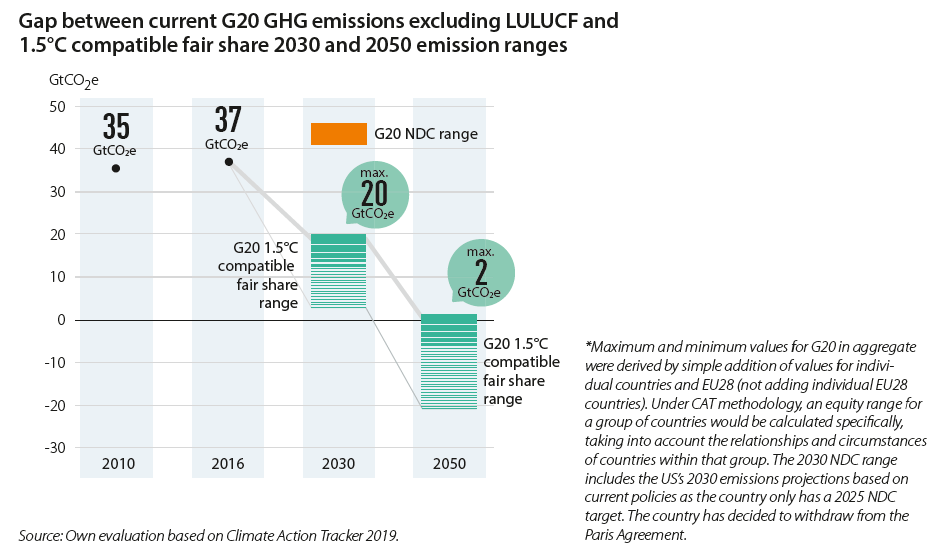 POWER: Global electricity generation needs to be decarbonised before 2050 but the G20 countries’ electricity emissions keep increasing. (+1.6% in 2018). The highest increase was reported in Indonesia and Turkey – both countries are significantly expanding coal power capacity. Only France, Italy, the UK and Canada have coal-phase out plans that are compatible with 1.5°C. 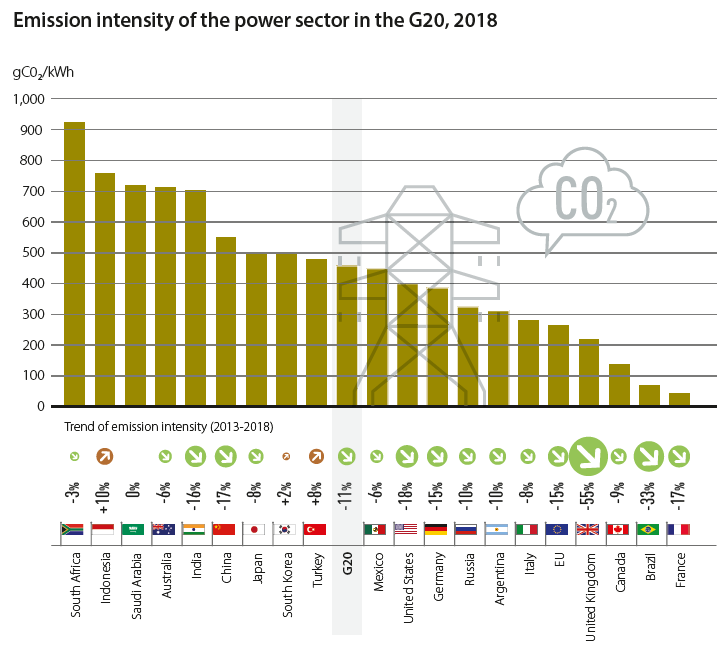 TRANSPORT: Transport emissions increased by 1.2 % in 2018. The US, Canada and Australia have the highest transport emissions per capita. The share of low-carbon fuels in the G20 transport mix (6 %) would need to increase roughly ten times until 2050, to keep warming below 1.5°C. Canada, France, Japan and the UK already show progressive long-term plans to phase out fossil fuel cars, and China sold almost 1 million electric vehicles in 2018. Still, successful policies for shifting to other transport modes or for decarbonising freight transport are missing across the board.

BUILDINGS: This is the sector with the highest emission increase. When counting also indirect emissions from electricity used in buildings, Saudi Arabia, the US and Australia had the highest per capita building emissions – the highest increase was recorded in China, India and Indonesia. Building emissions need to be halved by 2030. This would require energy refurbishments of existing buildings, and implementing near-zero energy standards for new constructions.

VULNERABILITY: Extreme weather events in G20 countries caused economic losses of USD 2.65 trillion and around 264,000 deaths over the last 20 years. Considering other climate impacts like sea level rise, these numbers would be even higher. Around 70 % of future climate impacts could be avoided by limiting global warming to 1.5°C instead of 3°C.

FINANCE: G20 countries are still spending billions in fossil fuel subsidies and finance for coal power. In contrast, 18 out of 20 G20 members have already implemented or are in the process of implementing carbon-pricing schemes. G20 economies are increasingly introducing policies and regulations that can help greening the financial system. Interestingly, the emerging economies are leading in policies that reduce climate-related risks for the financial system. 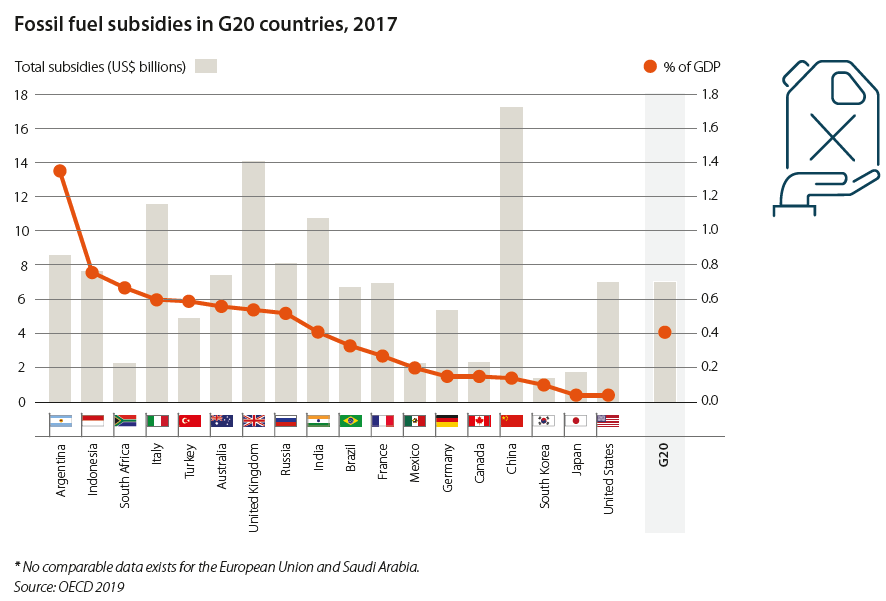 The Brown to Green Report is the world’s most comprehensive annual review of G20 climate action: it provides concise and comparable information on mitigation, finance and vulnerability. The report is published annually by „Climate Transparency“, a global partnership of 14 climate research organisations and NGOs from the majority of G20 countries, many from emerging economies.

Germanwatch is one of the main authors.