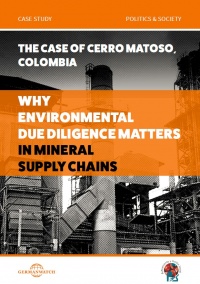 In the last year, the German government held intense and controversial discussions on the introduction and design of national due diligence regulation. However, environmental aspects of corporate due diligence were given little attention. By contrast, the debate at European level is already much more progressive. On January 27, the Legal Affairs Committee of the European Parliament explicitly recommended the inclusion of independent environmental due diligence requirements in a future European due diligence legislation.

» Weiterlesen
Publication
08 February 2021
Why environmental due diligence matters in minerals supply chain : the case of the planned Llurimagua copper mine, Ecuador 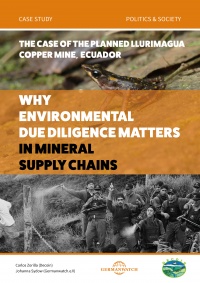 To this date, environmental due diligence has hardly been integrated into legislations and it is not yet as concrete as UN Guiding Principles on Business and Human Rights are in regard to human rights concerning responsibilities of corporations. Human rights due diligence captures environmental destruction when it is directly linked to human rights violation like a toxic spillage, which directly causes death or health issues.

Download: Why environmental due diligence matters in mineral supply chain : the case of the planned Llurimagua copper mine, Ecuador [PDF; 2,7MB] 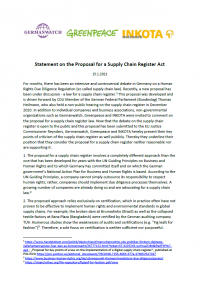 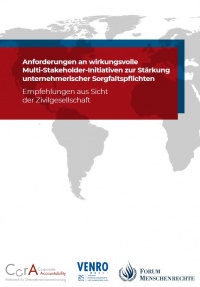 Recommendations from the perspective of civil society
In order to strengthen corporate responsibility along supply and value chains, so-called multi-stakeholder initiatives (MSIs) are often used nationally and internationally. Most recently, the Federal Ministry of Labour and Social Affairs (BMAS) announced its intention to step up its efforts to promote EU-wide sectoral dialogues within the framework of Germany’s EU Council Presidency. 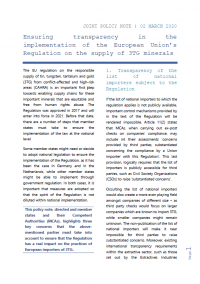 Claudia Saller (ECCJ), Julia Otten & Johanna Kusch on why the German government should give the mandatory human rights and environmental due diligence agenda a real push, both at home and in Brussels.
» Weiterlesen
Publication
20 February 2020
Mining Production, Territory and Conflict in Colombia 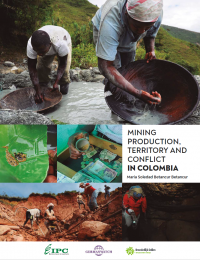 Artisanal gold mining in Colombia is associated with the financing of armed conflicts. The adoption of the EU Conflict Minerals Regulation in 2017 has raised attention to respective challenges. One of the world's largest gold smelters, the Swiss smelter Metalor, has consequently withdrawn from small-scale mining business. However, as the following study argues, the link between artisanal gold mining and the financing of armed conflicts in Colombia is much more complex. At the same time, small-scale mining faces criminalization by national legislation. A general boycott of this sector by major smelters can further marginalize the artisanal mining sector in favor of international mining companies. At the same time, the EU Conflict Minerals Regulation excludes many serious human rights violations, such as violent expulsions and massive environmental destruction by large mining companies destroying the livelihoods of local populations. 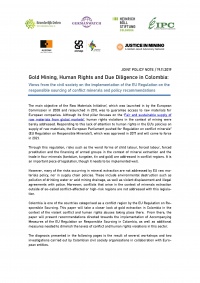 Views from the civil society on the implementation of the EU Regulation on the responsible sourcing of conflict minerals and policy recommendations
Colombia is one of the countries categorised as a conflict region by the EU Regulation on Responsible Sourcing. This paper will take a closer look at gold extraction in Colombia in the context of the violent conflict and human rights abuses taking place there. From there, the paper will present recommendations directed towards the implementation of Accompanying Measures of the EU Regulation on Responsible Sourcing in Colombia, as well as additional measures needed to diminish the levels of conflict and human rights violations in this sector.

Over 20 leading NGOs working on corporate transparency have published a statement calling on EU policy-makers to define companies’ disclosure obligations on sustainability issues on the occasion of today’s high-level conference on the future of corporate reporting hosted by the European Commission in Brussels.