Most damages resulting from weather extremes are often not recognised by international media, unlike Sandy's destruction at the U.S. east coast a few weeks ago. But in 2011, poorer developing countries have been hit much harder in average, according to the new edition of the Germanwatch Global Climate Risk Index. The ranking, which was presented today at the UN climate summit in Doha, concludes that Thailand, Cambodia, Pakistan and El Salvador are on top of those countries that suffered most from extreme weather events in 2011. 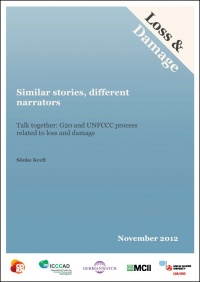 Talk together: G20 UNFCCC process related to loss and damage

Natural catastrophes, many of which are directly or indirectly expedited by climate change, take a heavy toll on people and economies. In 2011 a record high in economic damage was reached, with an estimated loss of more than US$350 billion. The human toll is...

we are living through some interesting, decisive and formative times. We are calling for change – a Great Transformation. On a small scale, civil society and various stakeholders are already mobilising, sometimes quietly, sometimes more vocally. Alliances and partnerships are forming, adopting highly diverse approaches and networking on a national or international scale... 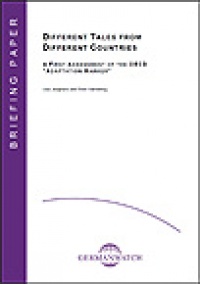 A First Assessment of the OECD "Adaptation Marker"

In response to the launch of the OECD "Adaptation Marker" in 2010 and the first complete Creditor Reporting System dataset published in March 2012, this paper ex-amines the credibility of the marker. Our assessment reveals that far less projects than the donor countries reported are in fact relevant to what can be considered climate change adaptation. 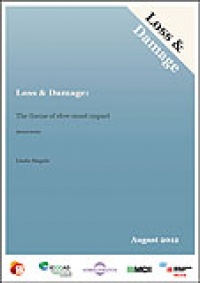 This policy briefing sets out a number of the issues relating to the slow onset portion of the climate change loss and damage agenda. It is not meant to be an exhaustive analysis of this new and sometimes complex subject. Instead, it should serve to introduce the concept of loss and damage related to slow onset climate change hazards and provide sign posts to guide further investigation of the subject – in particular for those institutions, experts and country representatives participating in the current work programme on loss and damage under the UN Framework Convention on Climate Change (UNFCCC). 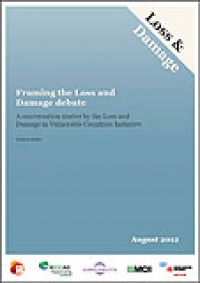 A conversation starter by the Loss and Damage in Vulnerable Countries Initiative, Advance version

This document outlines initial thoughts by the ‘Loss and Damage in Vulnerable Countries Initiative’ to provide some conceptual and framing input into the loss and damage negotiations under the UNFCCC. Given both the preliminary nature of these discussions and the complexity of the issue of loss and damage, a precise definition may not be necessary and in fact may even be counter-productive at this early stage. Instead at this point in the discussion it may be more useful provide a spectrum of relevant scientific and policy perspectives and areas of expertise in an attempt to inform ongoing dialogue. 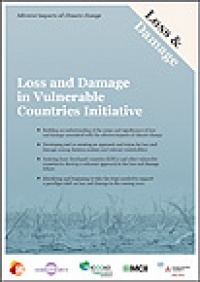 The Loss and Damage in Vulnerable Countries Initiative is focussing on: Building an understanding of the scope and significance of loss and damage associated with the adverse impacts of climate change; Developing and co-creating an approach and vision for loss and damage among decision makers and relevant stakeholders; Assisting least developed countries (LDCs) and other vulnerable countries to develop a coherent approach to the loss and damage debate; Identifying and beginning to take the steps needed to support a paradigm shift on loss and damage in the coming years. 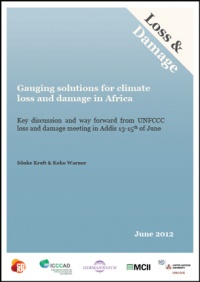 Loss and damage from climate change impacts is the major theme of the adaptation negotiation in 2012.

Version française: Évaluation des solutions en matière de pertes et préjudices …
Website: Loss-and-Damage.net
Publication
01 June 2012
Poster 3 of 3: If you're still wondering what your flight to Dubai has to do with natural disasters... (from the poster series „Connecting the dots“) 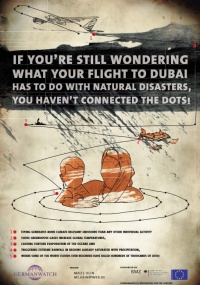 1. FLYING GENERATES MORE CLIMATE RELEVANT EMISSIONS THAN ANY OTHER INDIVIDUAL ACTIVITY
2. THOSE GREENHOUSE GASES INCREASE GLOBAL TEMPERATURES,
3. CAUSING FURTHER EVAPORATION OF THE OCEANS AND
4. TRIGGERING EXTREME RAINFALL IN REGIONS ALREADY SATURATED WITH PRECIPITATION,
5. WHERE SOME OF THE WORST FLOODS EVER RECORDED HAVE KILLED HUNDREDS OF THOUSANDS OF LIFES!

Download: Poster "If you're still wondering what your flight to Dubai has to do with natural disasters...", A4 [PDF, 615 KB]

German version of this poster
Publication
01 June 2012
Poster: One World, One Climate!