Our vision is a fair and ecologically compatible global agricultural, food, and trade system. We advocate for environmentally just and climate-adapted agriculture, animal husbandry, and land use as well as for fair incomes and rural areas worth living.

In the following, we present our three main topic areas:

EU agricultural policy has global and local impacts on the environment, climate, and biodiversity. Therefore, it must live up to its international responsibility and promote sustainable agriculture instead of obstructing the right to food here and also in countries of the Global South. At the same time, food production must be adapted to the climate crisis, and agriculture must become a positive factor for climate protection.

To achieve these goals, we advocate at EU level for a reform of the Common Agricultural Policy (CAP) as well as the consistent implementation of the "Fit for 55" climate protection package. The latter includes measures to achieve EU climate neutrality by 2050. In addition to adapting the EU regulation on land use, the entire land use sector should become climate neutral by 2035.

Industrial animal agriculture negatively affects climate and biodiversity goals and threatens the effectiveness of important antibiotics. Therefore, we are collaborating on strategies to phase out industrial livestock farming. This includes animal health, regional value chains, and fair prices for producers.

Excessive, incorrect, or even abusive use of antibiotics in human and veterinary medicine leads to the development of resistances. More and more antibiotics are currently in danger of becoming ineffective. As life-saving drugs, however, they are urgently needed—especially when they present the last or only available remedy for diseases.

The conditions in industrial livestock farming lead to a high and regular use of antibiotics, which irrefutably promotes the development of resistances. We therefore advocate for a significant reduction in the use of antibiotics in animal husbandry. This could be achieved through significant improvements in animal breeding and husbandry conditions. Additionally, antibiotics classified by the WHO as top priority antimicrobials (HP CIA) should be excluded from the use in industrial animal farming. To achieve these goals, we are working on the effective implementation of the EU Regulation 2019/6 on veterinary medicines and the ambitious design of national antibiotic resistance strategies.

Global trade impacts climate, biodiversity, and human rights. That is why our goal is to align EU trade policy with the Paris Climate Agreement and the UN Sustainable Development Goals (SDGs). We are committed to aligning agricultural trade more closely with social and environmental standards in order to create a sustainable trade regime.

Forests are crucial for climate protection and biodiversity. They are important carbon sinks, are home to around 80 percent of land-based animal species and provide the livelihoods of around 1.6 billion people. Yet every year, approximately 10 million hectares of forest are cleared worldwide, mostly to develop new agricultural land. The European Union is one of the largest trade actors and importers of goods linked to deforestation and ecosystem degradation. It thus has a major responsibility to make its supply chains more deforestation-free.

We are working to establish constructive, cross-regional exchanges between stakeholders from the Mercosur region (Argentina, Brazil, Paraguay, and Uruguay), from which a large number of agricultural products linked to deforestation is exported. The largest importers of these products are China and the EU. Our aim is to advance effective approaches and frameworks for deforestation-free supply chains.

To achieve these goals, we at Germanwatch focus on the following activities:

How can you support us?

Stay informed and sign up for our newsletter. In addition to many other Germanwatch topics, we will keep you updated on our work on agricultural policy, animal husbandry, and trade.

Engage with others on the topic of "sustainable agriculture" and help to tangibly advance the agricultural and food transition.

Support us with a donation in our daily work. Even small, regular amounts help us to keep these issues on the political agenda.

Together we can change agricultural policy and initiate positive impacts for the climate, biodiversity, health, and human rights!

Poultry company PHW most heavily contaminated with almost 60 per cent of contaminated meat samples / Study commissioned by Germanwatch and human medicine specialists tests 165 chicken meat samples from the three largest groups in the EU, purchased among others from Lidl and Aldi in Germany, France, Poland, the Netherlands, and Spain.

More than every second chicken meat sample (51 per cent) from the three largest poultry companies in Europe is contaminated with resistance to one or even several antibiotics at the same time. On average, more than every third chicken (35 per cent) even carries antibiotic-resistant pathogens with resistance to critically important antimicrobials highest priority into the food chain. These are the alarming results of a study published October 27. The study tested 165 chicken meat samples from the three companies, purchased in Germany, France, Poland, the Netherlands, and Spain.
Study "Chicken meat tested for resistance to Critically Important Antimicrobial…
» Weiterlesen
Publication
26 October 2020
Chicken meat tested for resistance to Critically Important Antimicrobials for Human Medicine 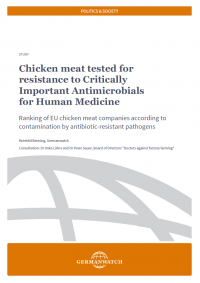 Germanwatch discloses: Chicken meat from the PHW-Group, Germany's largest poultry company, is almost 60 percent contaminated with antibiotic-resistant pathogens. This is the result of a Germanwatch study in which chicken meat samples from the three largest EU producers were tested in the laboratory. Every third sample even showed resistance to reserve antibiotics. These are emergency antibiotics that people need when other antibiotics no longer help. The more resistant pathogens are introduced into the food chain and into our kitchens with chicken meat, the greater the health risk that these last-line antibiotics will lose their effectiveness. 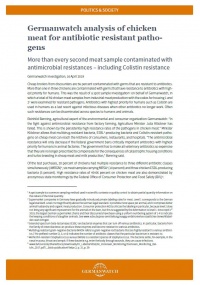 Antibiotics in intensive animal husbandry - after years of efforts by the German government, this should no longer be a cause for concern. But unfortunately it is, as a study by Germanwatch shows: More than every second chicken in discounters is contaminated with antibiotic-resistant pathogens. Every third chicken meat sample was contaminated with germs that have resistance to antibiotics with highest priority for humans.

» Weiterlesen
Publication
18 October 2017
Is the EU a Major Driver of Deforestation in Brazil? 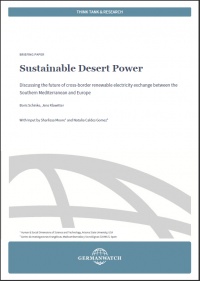 Quantification of CO2-emissions for Cattle Meat and Soya Imports
Reducing greenhouse gas emissions to limit global warming to well below 2°C or even to 1.5°C, as emphasised by world leaders in the Paris Agreement reached in December 2015, can only succeed if deforestation is cut dramatically in the next decades because the resulting emissions nearly make up one fifth of all greenhouse gas emissions worldwide. Most of the world’s deforestation is happening in South America and in Africa. Brazil has been the country with the largest deforestation for many years. It is far away from Europe, so can we lean back and put all responsibility for causing the emissions on Brazil?